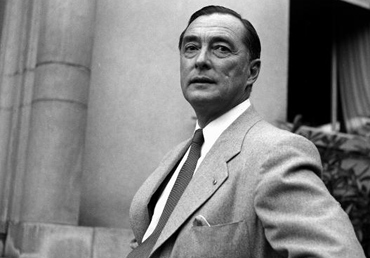 If anyone would like to know the capacity of how the Illuminati and globalists think and plan ahead and then veil and mask their global actions this will explain to you the current state of the world with the Mass Immigration we are seeing across the globe. IT IS NOT BY CHANCE. IT IS ENGINEERED BY THE ILLUMINATI THROUGH THE EU / UN AND FREEMASONRY. Here you go…

The Coudenhove-Kalergi plan – The genocide of the Peoples of Europe

This article is a translation of an Italian article, originally posted on Identità.

Mass immigration is a phenomenon, the causes of which are still cleverly concealed by the system, and the multicultural propaganda is trying to falsely portray it as inevitable. With this article we intend to prove once and for all, that this is not a spontaneous phenomenon. What they want to present as an inevitable outcome of modern life, is actually a plan conceived around a table and prepared for decades, to completely destroy the face of the continent.

Few people know that one of the main initiators of the process of European integration, was also the man who designed the genocide plan of the Peoples of Europe. It is a dark person, whose existence is unknown to the masses, but the elite considers him as the founder of the European Union. His name is Richard Coudenhove Kalergi. His father was an Austrian diplomat named Heinrich von Coudenhove-Kalergi (with connections to the Byzantine family of the Kallergis) and his mother the Japanese Mitsu Aoyama. Kalergi, thanks to his close contacts with all European aristocrats and politicians, due to the relationships of his nobleman-diplomat father, and by moving behind the scenes, away from the glare of publicity, he managed to attract the most important heads of state to his plan , making them supporters and collaborators for the “project of European integration”.

In 1922 he founded the “Pan-European” movement in Vienna, which aimed to create a New World Order, based on a federation of nations led by the United States. European integration would be the first step in creating a world government. Among the first supporters, including Czech politicians Tomáš Masaryk and Edvard Beneš and the banker Max Warburg, who invested the first 60,000 marks. The Austrian Chancellor Ignaz Seipel and the next president of Austria, Karl Renner, took the responsibility for leading the “Pan-European” movement. Later, French politicians, such as Léon Bloum, Aristide Briand, Alcide De Gasperi, etc will offer their help.

With the rise of Fascism in Europe, the project was abandoned and the “Pan-European” movement was forced to dissolve, but after the Second World War, Kalergi, thanks to frantic and tireless activity and the support of Winston Churchill, the Jewish Masonic Lodge B’nai B’rith and major newspapers like the New York Times, the plan manages to be accepted by the United States Government. The CIA later undertakes the completion of the project.

The essence of the Kalergi plan

In his book Praktischer Idealismus, Kalergi indicates that the residents of the future “United States of Europe” will not be the People of the Old Continent, but a kind of sub-humans, products of miscegenation. He clearly states that the peoples of Europe should interbreed with Asians and colored races, thus creating a multinational flock with no quality and easily controlled by the ruling elite.

Kalergi proclaims the abolition of the right of self-determination and then the elimination of nations with the use of ethnic separatist movements and mass migration. In order for Europe to be controlled by an elite, he wants to turn people into one homogeneous mixed breed of Blacks, Whites and Asians. Who is is this elite however? Kalergi is particularly illuminating on this:

The man of the future will be of mixed race. The races and classes of today will gradually disappear due to the elimination of space, time, and prejudice. The Eurasian-negroid race of the future, similar in appearance to the Ancient Egyptians, will replace the diversity of peoples and the diversity of individuals. Instead of destroying European Judaism, Europe, against her will, refined and educated this people, driving them to their future status as a leading nation through this artificial evolutionary process. It’s not surprising that the people that escaped from the Ghetto-Prison, became the spiritual nobility of Europe. Thus, the compassionate care given by Europe created a new breed of aristocrats. This happened when the European feudal aristocracy crashed because of the emancipation of the Jews [due to the actions taken by the French Revolution]

Although no textbook mentions Kalergi, his ideas are the guiding principles of the European Union. The belief that the peoples of Europe should be mixed with Africans and Asians, to destroy our identity and create a single mestizo race, is the basis of all community policies that aim to protect minorities. Not for humanitarian reasons, but because of the directives issued by the ruthless Regime that machinates the greatest genocide in history. The Coudenhove-Kalergi European Prize is awarded every two years to Europeans who have excelled in promoting this criminal plan. Among those awarded with such a prize are Angela Merkel and Herman Van Rompuy.

The incitement to genocide, is also the basis of the constant appeals of the United Nations, that demands we accept millions of immigrants to help with the low birth rates of the EU. According to a report published on January 2000 in «Population division» Review of the United Nations in New York, under the title “Immigration replacement: A solution to declining and aging population,” Europe will need by 2025 159,000,000 migrants.

One could wonder how there can be such accuracy on the estimates of immigration, although it was not a premeditated plan. It is certain that the low birth rate could easily be reversed with appropriate measures to support families. It is just as clear that it is the contribution of foreign genes do not protect our genetic heritage, but that it enables their disappearance. The sole purpose of these measures is to completely distort our people, to turn them into a group of people without national, historical and cultural cohesion. In short, the policies of the Kalergi plan was and still is, the basis of official government policies aimed at genocide of the Peoples of Europe, through mass immigration. G. Brock Chisholm, former director of the World Health Organization (OMS), proves that he has learned the lesson of Kalergi well when he says: “What people in all places have to do is to limit of birthrates and promote mixed marriages (between different races), this aims to create a single race in a world which will be directed by a central authority. “

If we look around us, the Kalergi plan seems to be fully realized. We face Europe’s fusion with the Third World. The plague of interracial marriage produces each year thousands of young people of mixed race: “The children of Kalergi». Under the dual pressures of misinformation and humanitarian stupefaction, promoted by the MSM, the Europeans are being taught to renounce their origin, to renounce their national identity.

The servants of globalization are trying to convince us that to deny our identity, is a progressive and humanitarian act, that “racism” is wrong, because they want us all to be blind consumers. It is necessary, now more than ever, to counter the lies of the System, to awaken the revolutionary spirit of the Europeans. Every one must see this truth, that European Integration amounts to genocide. We have no other option, the alternative is national suicide.

Translator’s note: Although the reasons due to which Kalergi made the choices he made are of no particular interest to us, we will try to answer a question that will surely our readers have already asked: Why a European aristocrat with Flemish, Polish, Greek-Byzantine roots and even with some samurai blood in his veins (from his mother) was such body plans and organ in the hands of dark forces? The reasons, in our opinion, are multiple, idiosyncratic, psychological and … women.

We therefore observe a personality with strong snobbish attitudes, arrogance, and, allow me the term, “degenerate elitism.” Also, the fact that his mother was Asian, perhaps created internal conflicts and frustrations, something that can happen to people with such temperament. But the most decisive factor must have been the “proper teenager”, which incidentally of course, was beside him, and became his first woman (at age 13): The Jewess Ida Roland, who would later become a famous actress.

On November 16th 2012, the President of the European Council, Herman Van Rompuy, was awarded the Coudenhove-Kalergi Prize, during a special conference in Vienna, to celebrate the 90 years of the pan-European movement. The prize is awarded every two years to leading personalities for their outstanding contribution to the process of European integration.

A decisive factor that helped him win the prize was the balanced way in which President Van Rompuy executed his duties in the new position of President of the European Council, which was established by the Treaty of Lisbon. He handled this particularly sensitive leading and coordinating role with a spirit of determination and reconciliation, while emphasis was also given to his skilful arbitration on European affairs and unfailing commitment to European moral values.

During his speech, Mr Van Rompuy described the unification of Europe as a peace project. This idea, which was also the objective of the work of Coudenhove-Kalergi, after 90 years is still important. The award bears the name of Count Richard Nicolaus von Coudenhove-Kalergi (1894-1972), philosopher, diplomat, publisher and founder of the Pan-European Movement (1923). Coudenhove-Kalergi was the pioneer of European integration and popularized the idea of ​​a federal Europe with his work.

Among the winners of the award, the Federal Chancellor of Germany Angela Merkel (2010) and the President of Latvia Vaira Vike-Freiberga (2006), are included.